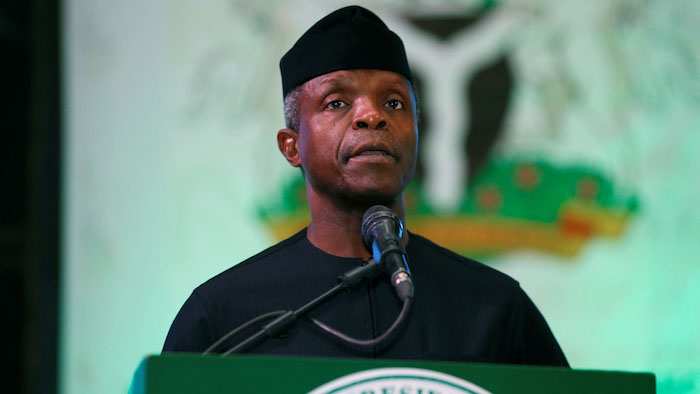 The Nigerian Vice President, Yemi Osinbajo has forecasted a potential income gain of about $450 billion in the country’s economy through the African Continental Free Trade Area (AfCFTA).

The VP stated while delivering a message, at the closing of the 2021 Conference of African Insurance Practitioners on Wednesday. He noted that that the AfCFTA which is a trade agreement between AU member states to create a single market followed by free movement and a single-currency union, presented opportunities for African countries.

Osinbajo stated, “By some estimates, if we get it right, we can bring several million out of extreme poverty and raise the incomes of 68 million others who live on less than $5.50 per day”.

Adding that there are potential income gains of up to $450 billion, and just cutting red tape and simplifying customs procedures alone could drive up to $250 billion of that sum.

According to the VP, amidst monumental challenges posed by climate change, particularly energy transition and related issues, the coming decade anchored on the AfCFTA) offers great opportunities for Africa’s socio-economic transformation.

He urged African insurance practitioners to leverage opportunities in the AfCFTA, adding that “every smart economic grouping, whether governments or businesses, must be thinking, planning and strategizing for these new times.”

He explained that the implication for the insurance industry in Africa would be plenty of opportunities as more trade in goods would mean a greater need for insurance services.

“We can expect to see more well-capitalized insurance providers from other African countries coming to compete in the Nigerian market. And we shouldn’t be surprised if this happens quickly,” Osinbajo said.

“Services can be set up faster than manufacturing plants. Nigerian financial services companies, especially banks, are already in many African Countries, like Zenith, Access, UBA.

“How about Insurance companies? We should now be looking at developing homegrown international African insurance conglomerates. The time is now.”

On the issue of climate change, Prof. Osinbajo probed, “How is the African insurance industry preparing for the interesting days ahead?”

Referencing a Mackenzie podcast transcript, the VP said: “It was quite eye-opening. While there will obviously be opportunities for new insurance products and solutions, especially in the property and casualty segment of the business, insurance companies must also be prepared for the systemic nature of climate-induced damage, with the possibilities of market failures and more system-wide destabilization.”

“Here in Nigeria, the growing intensity of flooding and damage to vast agricultural acreages might have a knock-on effect on other areas of the economy. Further slumps in the economy are bad for everyone, even insurers.”

He said, in the past two years, the wealthier countries, after building their economies on fossil fuels, had started banning or restricting public investments in fossil fuels, including gas.

Explaining the implication of the trend on Africa’s growing oil and gas markets, Osinbajo said African insurance companies must be at the forefront of the campaign for a just and equitable transition to a low carbon future.

“This means that we cannot accept a defunding of gas projects when gas is an important transition fuel for us,” the VP explained.

“Not just to get our people from the environmentally damaging firewood to cooking gas, and also autogas for our auto vehicles, but to also provide much-needed power for industries and domestic use.”

Osinbajo warned that Africa’s economic future might be at risk if the continent did not insist that the necessary speed to zero emissions must not mean disaster for African economies.