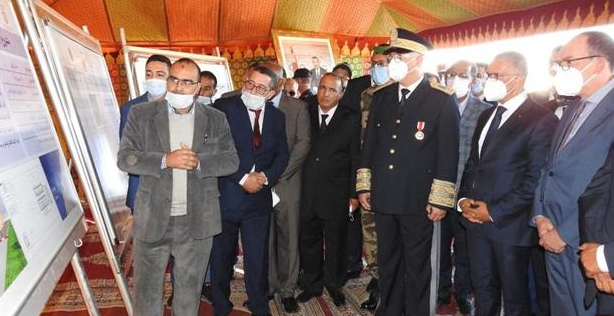 As part of the commemoration of the 46th Green March anniversary, Morocco’s government announced major projects in El Guerguerat and Bir Gandouz, in Moroccan southern provinces.

Accompanied by other local authorities and military figures, Hafidi launched the electrification and drinking water supply project at the El Guerguerat crossing point between Morocco and Mauritania, as well as other several large scale projects in the province of Aoussered.

The project is part of Morocco’s vision to support the socioeconomic development of emerging municipalities and urban centers in its southern provinces.

As well as continuing the campaign to make the provinces a major investment and trading hub in Africa, the projects are also part of the government’s determination to rise to the challenge of increasing energy and drinking needs, ONEE said.

Several partnership agreements have been signed between ONEE, the province of Aoussered, the region of Dakhla-Oued Eddahab, and the commune of Bir Gandouz in addition to other stakeholders to boost the electricity sector. Under the agreements, ONEE will ensure the generalization of electrification at the level of the emerging centers of the province of Aousserd for a total budget estimated at MAD 188 million ($20.69 million).

El Hafidi also inaugurated electrification works at El Guerguerat border post via its connection to the electricity network of the Bir Gandouz Center.

The project will require a budget of MAD 77 million ($8.47 million) and is scheduled to start in October 2022.

It is co-financed by ONEE, the Regional Council, the General Directorate of Local Authorities, and the Agency for the promotion of economic and social development of Morocco’s southern provinces (APDS).

Also being carried out by ONEE are technical studies for the connection of the Bir Gandouz and El Guerguerat centers to the national network of very high voltage electricity.