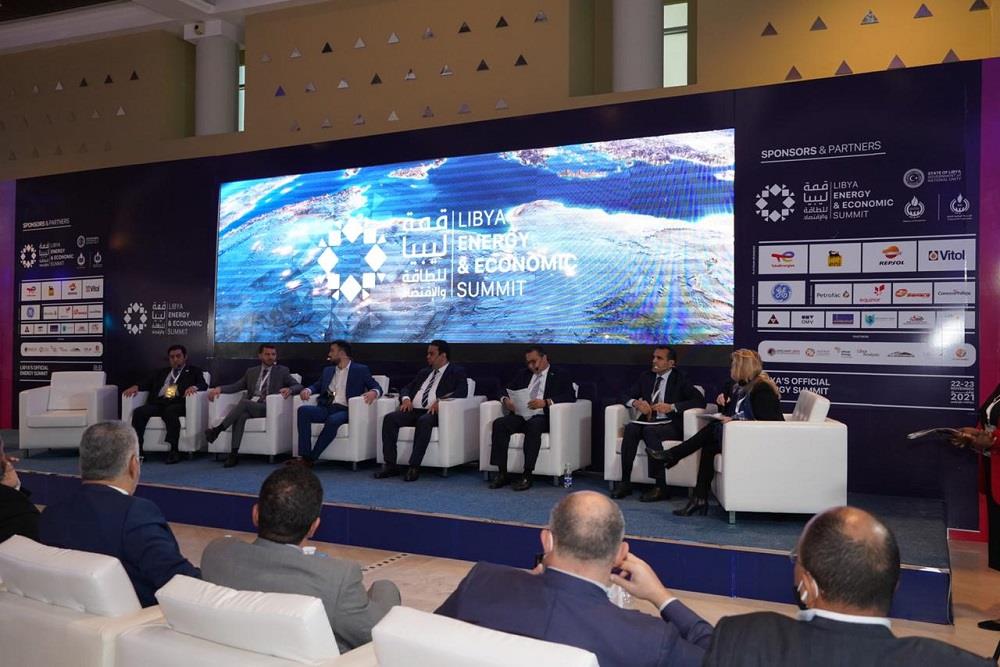 The Libya Energy&Economic Summit 2021 is committed to driving foreign capital, technology and expertise into the country’s energy sector, utilizing sectoral revitalization as a catalyst for broader economic growth. Accordingly, a panel discussion on day two of the Summit examined Libya’s infrastructure needs and the progress needed across the energy spectrum to support national growth.

Introducing the panel discussion, Hirst emphasized the potential of Libya, the role of international companies, and what conferences like the Summit will mean for Libya’s energy and economic progress. “The purpose of an event like this is to be able to make connections, network, and talk to people, and there will be more events like this in Libya. I truly believe that U.S. companies and American values can contribute positively to Libya. At AmCham, we believe in the promise of Libya and will engage by positively contributing to the progress of Libya,” stated Hirst. Despite holding the largest oil and gas reserves in Africa – recoverable reserves are estimated at 43 billion barrels of oil and 1 trillion cubic meters of natural gas – there remains a gap in Libya’s infrastructure sector. If the country is to realize its economic development goals, and ensure the energy sector supports national growth, significant levels of investment are needed. “We need to jumpstart facilities after several years of shutdowns. During these shutdowns the facilities naturally decay; they survive and have a longer life when they are running. We have to get every piece of equipment in running shape. This takes a lot of work, and this is what the government and all the institutions are working on now,” stated El Gabr.

“The target for the country is very clear, to increase to 2.1 million barrels per day. This needs to start with existing project facilities which will be used to finance new facilities. We need to have a friendly environment for investors, and this should be on all aspects, law, banking and more,” stated Bellatache.

Additionally, the panel discussed what needs to be done in Libya to accelerate energy sector advancements. From regulatory amendments to transparency, speakers emphasized that Libya is capable of driving further investment in the country if the government addresses the current barriers to entry.

“Holistically, I would like to see clarification on the concept of value for public money. Money spent should have value for the Libyan people. Secondly, we need overarching sustainability goals, so we know where to get to on that level. Thirdly is certainty of payment for stakeholders,” stated Eltumi.

With the swearing in of the unity government and renewed peace across the nation, Libya is on the precipice of an economic transformation. Heavily reliant on hydrocarbons, the country could tap into other sectors to initiate economic growth.

“Yesterday we [were] lucky to see and attend the ceremony of the signing of 500MW of energy which will need significant support. Mitsubishi could give support. Mitsubishi’s power can have real power in less time, we can be an added value to this contract that has been signed,” stated Elhalluj.

Finally, the role of gas and gas-related project developments was emphasized, with speakers offering insight into the opportunities present in Libya’s energy sector. Notably, Palaia IV promoted the role of U.S. technology in gas capturing projects in Libya, stating that “We are interested in bringing new technology that we commercialized in the U.S. to the international community. There are a lot of opportunities here to capture flared gas and turn this into fuels to benefit the local economy while at the same time reducing emissions. The new government has taken on the leadership role by committing to the Paris accord and emission reduction targets and we can all be involved to help them achieve this target.”

Furthermore, Aoun promoted two areas of focus that should be addressed in Libya to help drive economic growth. “Firstly, we need a private sector power energy provider. Power generation and the private sector is a great alternative and a first step start for Libya. Secondly has to do with gas. We have a project called the gas gathering project. I encourage you to follow this. The project involves gathering gas from flares in the oilfields which will be added value for the market. It will have an environmental impact and a commercial impact,” stated Aoun.